Sher Khan, bright eyes flashing in the Indian jungle, shuddering in the fires of rural villages, mythologised in the Asian psyche: for centuries tigers have been an icon predator of the East, so much so that powerful modern Asian states have even been branded the Asian tiger economies… A magnificent feline, yet a far cry from the African lion. 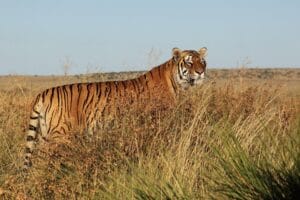 For starters, they aren’t fundamentally different from the African lion and leopard. All three breeds belong to the Felidae family of cats which originated in Africa, with the tiger migrating to Asia around 2 million years ago. There it evolved into the striped cat that stalks elusively through the dense jungle foliage, establishing itself as an apex predator. The Pleistocene era saw the development of glacial fluctuations and geographic developments that later prevented tigers from returning to Africa, and as they settled proudly atop the food chain of their new habitat, they were given very little reason to leave: after all, if it ain’t broke, don’t fix it.

Sadly, tiger habitats in Asia did begin to break apart with the unstoppable growth of human populations, causing the tiger to compete for territory with the “manchild”, a competition that it sorely lost. Today, the number of wild tigers in India hovers around 2500, placing them on the International Union for Conservation of Nature (IUCN) red list of critically endangered species.

It was for this reason that John Varty (JV) first asked the question: why not have tigers in Africa? In the race against time, could the tigers not be brought back to the starting point, to the African continent from which they first set out millennia ago? His ex-situ experiment began with the rewilding of two captive-born cubs, Ron and Julie, which he acquired from a zoo in Canada. The first step was to see if these cubs could be rewilded on the plains of Africa, and learn to hunt indigenous game in the long grass and rocky outcrops with the same success as the lion or the leopard. This rewilding process was captured in the Discovery Channel series Living with Tigers, which documented the long labour of love during which JV taught the cubs to survive and hunt in the Upper Karoo region of South Africa. These two founder cubs did not only survive, they thrived, and with the later introduction of two more captive-born cubs, Shadow and Seatao, went on to establish a breeding population that in the last twenty years has resulted in 11 wild tigers and 11 wild-born cubs at Tiger Canyon.

Part of this success has been due to the tigers’ remarkable adaptability to the terrain at Tiger Canyon, blending in effortlessly with the dapple yellow grass so typical of Africa, while the many dongas and ravines provide perfect ground on which to stalk prey. Tigers are massive, powerful cats, regularly tearing down a wildebeest or a large antelope. As they hunt they in turn keep antelope numbers in check, setting in motion a self-sustainable eco-system maintained with minimal human interference.

So what does the future hold for tigers in Africa?

Having proven that tigers can be safely rewilded to adapt to the African habitat, we hope to extend the perimeters of our sanctuary in order to accommodate our growing population of tigers. Our dream is to introduce African big cats to Tiger Canyon, such as the lion and leopard, in order to establish a full-energy flow ecosystem with the tigers living alongside the other great predators of our continent. And ultimately, we hope to return these free-born tigers to Asia where they can go on to replenish diminishing populations there. This dream has already been set in motion, and through the partnership of these two vital regions of the world, we hope to save the tiger for future generations:

“Save the tiger and you save the forests, the rivers, the birds, the insects and indeed all things that make up the pyramid of life.” – John Varty