We sat down recently with wildlife filmmaker and conservationist John Varty in order to find out more about the beautiful photographic tribute Celebrating Tigers, which was created in collaboration with photographer Alex Kirichko and features the tigers of Tiger Canyon.

The Celebrating Tigers book is a beautiful and astounding photographic tribute to the tigers at Tiger Canyon, which you did in collaboration with the photographer Alex Kirichko. What first inspired you to create this book?

A lot of photographers come to Tiger Canyon, and they travel all over African and all over the world shooting pictures. And I always ask these photographers, what do you do with these pictures? There’s no point accumulating two million pictures if they’re in your hard drive collecting dust – they’re not doing anything, they’re not creating awareness, they’re not inspiring people, they’re not educating people.

So Alex visited Tiger Canyon four or five times, and I kept on saying that he had to do something with his pictures. Eventually we decided to compile a book in which I would do the writing and he would provide the photographs, and the result was Celebrating Tigers.

How long was the process of putting the book together?

Once we decided to do the book, we began using all the photographs that Alex had captured on his previous trips to Tiger Canyon. With all this great material already compiled, the process from the decision to the end result took about a year.

Did you spend a lot of time with Alex in the field while he was shooting photographs? Are there any interesting anecdotes you may recall from that time?

Yes I did spend a lot of time with Alex throughout the process.

At one time we were following the famous and notorious tiger Corbett as he was moving around marking territory, when suddenly we heard tigers fighting. Corbett immediately began to run in the direction of the fight: what had happened was that Corbett had fathered a litter of cubs with the tigress Zaria, and when we arrived there a male by the name of Tiger Boy was in the process of killing the cubs (a male tiger will often try to kill cubs that are not his own). Corbett went straight in and attacked Tiger Boy, and though Corbett was the bigger of the two, Tiger Boy got Corbett in a death grip by the throat and was suffocating him. At this moment the tigress Zaria appeared and jumped onto Tiger Boy’s back. In the meantime we were located in a very rocky area, and we were trying to thread our way towards the tigers but the rocks were too many to get through. The tigers were located at 12:00 from the vehicle, and I tried to maneuver the vehicle in order to position Alex for the shot, and eventually managed to place him perfectly in position. But it was in fact so dramatic and so brutal that he so was stunned that we actually never got the shot!

Do you often find that when photographing tigers one becomes so astounded by the moment that one may miss a shot?

Most professional photographers must be prepared for that dramatic moment. I always tell most photographers to come prepared with more than one body, and to have their cameras set at a fast shutter speed so that if that moment comes you’re ready. Sometimes with wildlife photography you get a fraction of a second before the shot is over. In that brief moment with the tiger fight between Corbett and Tiger Boy there was just that brief moment in which tigress Zaria sprang on Tiger Boy’s back, and he had to turn around to attack Zaria. His jaws released Corbett, and then Corbett came up and both tigers fled in opposite directions and Zaria went immediately to her cubs. All this action happened in less than a second, providing minimum time.

But you mustn’t allow failure to discourage you – you must have the attitude that if you missed one shot, you’ll get the next one. 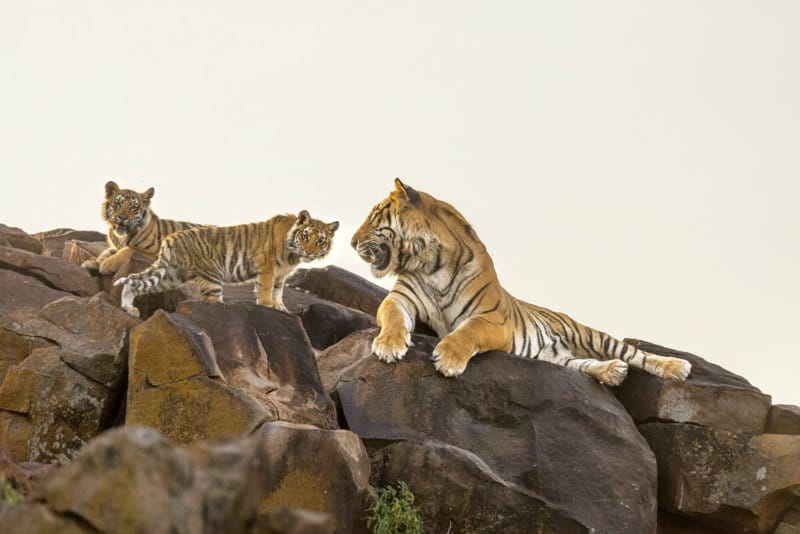 The tiger is renowned for its great beauty, strength and speed. The tiger also brings the other dimension of water: lions and leopards will only go into water if they have to, but a tiger will go into the water to keep cool; tigresses hide their kills in the water to mask the scent; and in general tigers love water. And this gives you a whole new dimension – you’ve got beautiful cats backlit in the water, and if you can capture that it makes for a fantastic sequence.

I’m more of a communicator than a photographer. Everybody wants to get beautiful shots of tigers and leopards and lions, art pieces that are beautifully lighted like in the Celebrating Tigers book. I’m more interest in the behaviour and the management of the tigers, and so I’ll shoot photographs from that perspective.

What makes the Celebrating Tigers book particularly powerful is that many of the photographs captured the tigers in the unique landscape of the Karoo in South Africa, where Tiger Canyon is situated.

The Karoo is just a spectacular landscape on its own. Now when you put an iconic, apex predator – which some say is the most beautiful cat in the world – in this dramatic landscape, especially with the famous light of the golden hour in the afternoon, even an average photographer can make the tiger glow. It’s a brilliant backdrop to a beautiful animal. 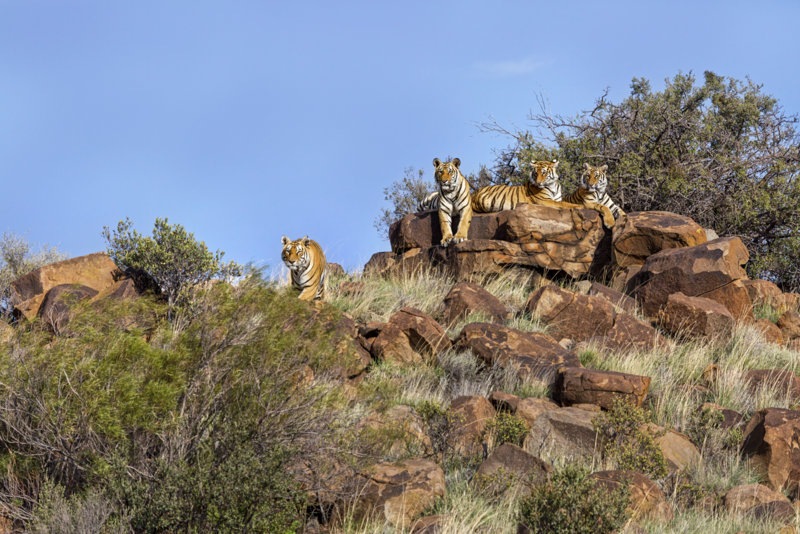 What do you hope that future photographers will gain from visiting Tiger Canyon?

Digital photography changed the face of conservation, and opened the door to a world of photographic enthusiasts, so that professional photographers no longer have the monopoly on fantastic shots. An amateur in the right place at the right time with the right setting on his or her camera can produce a world-class shot.

Photography grips people and is something very personal. To any young photographer I always say that this is a career that has so much possibility, and with the ever-improving technology there are no limits to what you can achieve as a photographer today.

Photography has become essential to the tiger project. From when I started the project with (founding tigers) Ron and Julie to now, I have all the tigers photographed and recorded. In this way I was able to document tiger behaviour occurring at one point in time and the same behaviour being repeated five years later, reinforcing my understanding of tiger behaviour based on the photographic record I had acquired.

At Londolozi we have recorded eight generations of leopard, which gives you knowledge that is unique in the world.

I would say that today you couldn’t do a project like this without photography. It’s a fantastic drawcard: a beautiful cat in a great environment combined with digital photography all coming together. Five star accommodation and good food you can get anywhere in the world – but a tiger, in a landscape like this, with a knowledgeable guide makes Tiger Canyon truly unique. 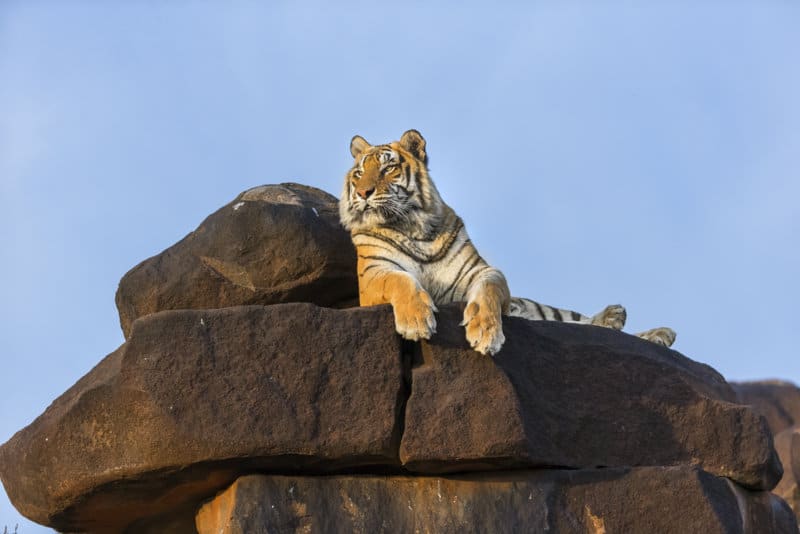