Enter Philippolis: The Time Machine of The Karoo

The Karoo town of Philippolis is a traveler’s gem that has been unearthed in recent years. Having long lived in the consciousness of many a South African explorer, it is becoming increasingly popular with international travellers traversing the mysterious stretch of country between the bush (in the northern Sabi region) and the beach (most popularly along the Western Cape).

Located 25km from Tiger Canyon, this historical village creates an intersection between various ways of life. While today it supports a thriving sheep farming community, historically it was the battleground of many skirmishes during the Anglo-Boer war, and in an older, more peaceful age, the area was home to the San people, an ancient culture whose beautiful rock paintings can still be found hidden along koppies and ravines.

As the place where many cultures met, and fought, and reconciled, Philippolis is preserved in a world only glimpsed by modernity, in a quietude yearned for by many. Its streets are lined with old Karoo houses, their singular style of pillared ‘stoeps’ where neighbours gather around a good coffee or a fine wine, waving at passers-by; many of these buildings are historical landmarks, and have therefore been carefully restored, so that the town is often regarded as one of the most well-kept in the Karoo. Arriving in Philippolis is like stepping into a time only found in the pages of Victorian novels, steeped in the golden light of the Karoo sun, guarded at night by the Karoo stars. 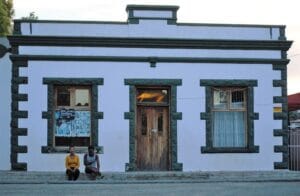 As such, the town has long been an attraction to writers and artists, and is noted as the birthplace of renowned South African novelist, Lourens van der Post. This seminal writer’s ashes are kept at the local Van der Post memorial centre, and his private collection of books (including personally signed copies from Margaret Thatcher) is open for public viewing. Van der Post’s reach was far, beloved of the international community, and as the godfather of Prince William, Duke of Cambridge, his belief in conserving the natural world and, more importantly, celebrating the culture of the Bushman, has returned to his birthplace: the town where just nearby the majestic tiger is being conserved in the uplifting embrace of eco-tourism. 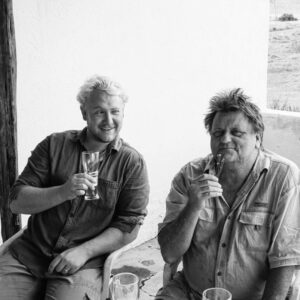 Philippolis’s small-town offering is in fact immense. Its main road boasts interesting local coffee shops and restaurants, including the Rooi Ooi (or ‘Red Ewe’, a popular local restaurant that offers good food, good wine and good conversation); Kardoesie, (or ‘Little bag of everything’, with its hearty lunch menu, wall of historical photographs, and selection of secondhand books); and Oom Japie se Huis (or ‘Uncle Japie’s House’, a popular bookshop featured on many nationwide book-tours, with an evening restaurant that offers refined Karoo dining). The Shop, a local antique store, attracts clients from far and wide, many people making the special trip to peruse the fine offerings of silverware, furniture, art and books. The TransGariep Museum takes visitors through the many cultures that make up the town, including the San, Griqua, Xhosa, Boere and British, and features the kettles in which fiery Wtiblits was once made. The Jobs House is a fascinating art gallery that takes visitors on a spiritual journey through the trials of Job, an art tour that is set off by the thunderous intensity of Rachmaninoff playing in the background. Karoo Ale, located 7km outside of the town, is a craft brewery that offers beer tastings of their singular range produced from local Karoo flora, includig the Kapokbos and the Karoobos.

Yet in all this, Philippolis offers something more intangible and yet more precious: the opportunity to partake of a lifestyle that has become ever more rare, ensconced in a beauty unlike any other: the mysterious, vast and untouched beauty of the Karoo. 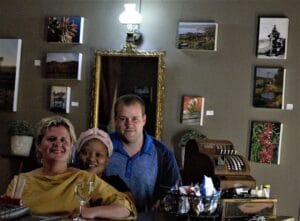 Carin Pienaar and her welcoming staff at the stylish Rooi Ooi restaurant.