The Magic of Rain in the Karoo

In many parts of the world the prospect of rain is considered an unwelcome and gloomy dampener on the day’s events: picnics cancelled, camping trips ruined, outdoor parties a dismal failure. But across the big-sky reaches of the semi-arid Karoo region of South Africa, rain spells a time of powerful and beautiful magic.

Summer has come, leaving winter behind with its glittering blankets of morning frost, intense skies of cold stars, and the soft-lighted rainless days. Tiger Canyon is located in a summer rainfall area that extends from the Nama Karoo into northern Africa, with only the southern parts of South Africa experiencing winter rainfall. Though a characteristically dry part of the country, this area enjoys sudden bucketings of rain that reach up to 400ml in the summer, resulting in sweeps of green that erupt from the waiting earth.

These rainbursts arrive as darkly brooding kinetic thundershowers, preceded by intensely hot days as a high pressure system builds up. Large cumulo nimbus clouds gather across the blue-bruised sky, filling the atmosphere with static anticipation. As the pressure drops, the rain falls with quick intensity and lightning rivets the base of the brimming clouds. The wide grassy plains become enfolded by the storm, the rocky hills red against the navy cloudbank.

The summer rainfall has long been an important aspect in the dynamic of the regional habitat. Between 100 to 200 years ago this area was home to the largest antelope migration in the world, when up to 160 million springbuck would cross the Karoo as they followed, in segmented groups, the green flush left by the summer showers. Some historical documents describe how they travelled night-and-day, head to tail, across the region. Being highly selective grazers, the springbuck would create grazing lawns which maintain the nutrient cycle of the soil, while introducing fertilizers through their defecation and a tilling effect as they moved across the terrain in large droves.

A springbuck herd passes beneath a gathering cloudbank at Tiger Canyon

When the first European settlers arrived in the area they set up cattle and sheep fences which severely hampered this historical migration. Today, the so-called trekbokke (moving buck) make limited appearances along their old route. Sadly, this has resulted in the field quality of the area being worsened by the depleted nutrient cycle, because the positive effects which the springbuck migration had on the regional grasses no longer work in cohesion with the summer rainfall.

Today, the rains still have a positive effect on the wildlife at Tiger Canyon. Young game born in the spring feed off the nutritious new grass, while local birdlife flock to the seasonal watering holes. Tigers love water in particular, and during the thunderstorms the resident prey species have been seen to become overwhelmed, even giddy, allowing the tigers to hunt more easily. The tigers unfold from their hot sleep to stalk through the long grass or sheltered overgrowth towards the prancing springbuck and galloping wildebeest, too overcome by the great rains to notice the orange flash of the creeping cat. At a range of approximately 6 to 9 metres, the tiger suddenly lunges from its concealment in a powerful spurt of agility, pouncing on the fleeing springbuck to drag it down, its muscular hind legs digging into the ground. The darkening night betrays no sound, only the heavy thrum of the steadily falling rain, and as the thunder subsides into the softness of the shower, it is as if the tiger had never even appeared. 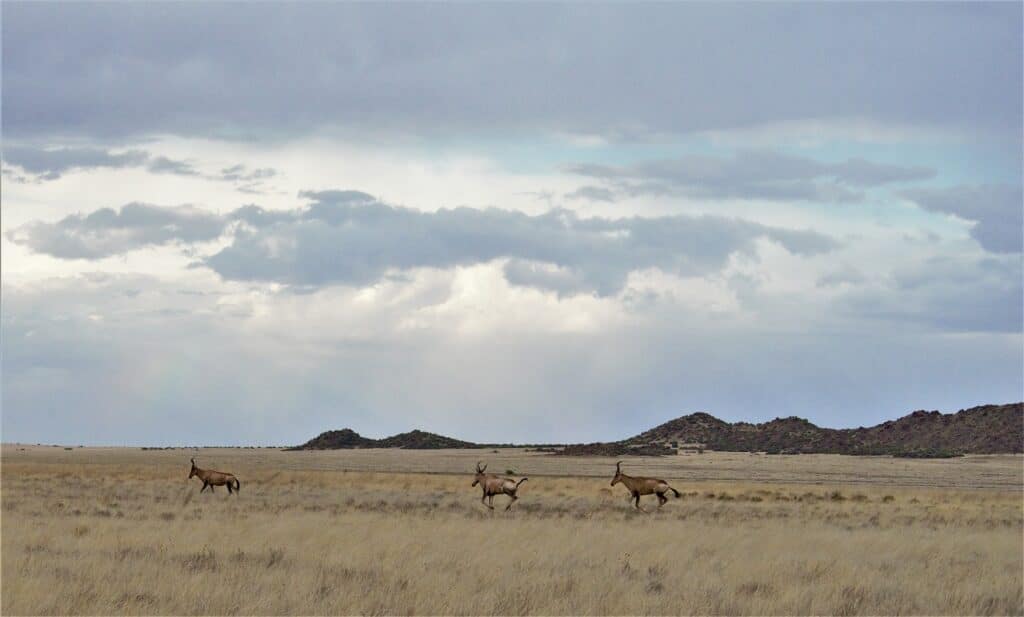